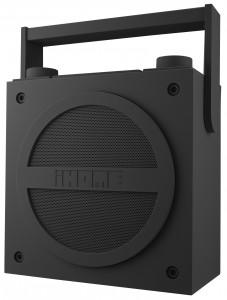 The iHome iBT4 boombox brings you back to high school days, at least for me.

After connecting with any Bluetooth-enabled device, music is streamed to the hand-held speaker.

The old school look, complete with dial knobs on top, makes you want to carry it on your shoulder with the moveable handle on the 3-pound device.

Inside the rubber-coated box are iHome’s Reson8 speaker chambers along with an internal lithium-ion battery for up to 7 hours of sound, depending on volume levels. A universal AC adaptor is also included.

If broadcast radio is still your thing, there is a built-in FM radio you control on top along with a line-in jack for plugging a media player directly from it’s headphone port.

As with every iHome product I’ve tested, this one once again falls into the same category as all the others; well built, easy to use and sounds great. Boombox are generally meant to crank up the sound and the iBT4 lets you do just that. 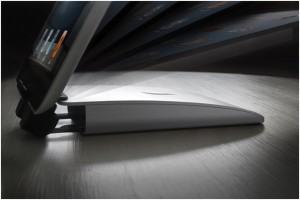 The iSider from Rain Design is one of the most useful and compact iPad/iPhone stands I’ve seen.

There isn’t a lot to it, except that it works well. Measuring about the size of a smartphone (.5. x 3 x 1-inches).

The slick-designed device has an anodized aluminum cover to make a nice match with the iPad or iPad Mini. Under the cover is a base that slides out, which has rubber tips to protect your device from scratches when they are connected.

There’s an opening in the bottom for your charging cable, if needed.

From there you adjust your viewing angle, which can go in landscape or portrait modes in multiple angles and attach to your iOS device.

With my Apple Smart Cover on my iPad I had it in portrait mode, along with a Bluetooth keyboard, as I wrote this column.

www.raindesigninc.com $49.90 and it includes a carrying bag 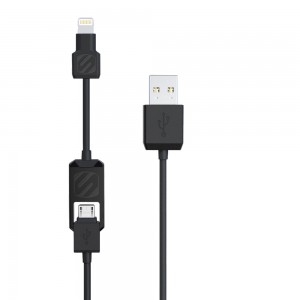 Scosche has unveiled seven new charge and sync solutions for both Apple’s Lightning connection and microUSB-powered mobile devices, which are great for everyday use along with being travel-friendly. That eliminates the need for multiple charging cables for different devices.

Five feature a patent-pending 2-in-1 connector, which can be used to charge nearly any new smartphone, tablet and many other USB powered portable electronic gadgets.

Among them, the 3-foot long smartSTRIKE ($24.99) has the new connector to charge and sync both the new Apple Lightning connector devices and microUSB devices, all with one cable.

A retractable version of the same cable, smartSTRIKE PRO ($29.99), extends up to three feet with the 2-in1 connector on one end and USB on the other.

The strikeDRIVE PRO ($49.99) car charger has two 12 Watt USB ports to give you the fastest simultaneous charge possible for a pair of devices. It’s built to utilize universal charging circuitry, which has been optimized for use with all tablets and smartphones.

The strikeBASE PRO ($39.99) is a dual five watt wall charger and the strikeDRIVE SMART ($34.99) is a tablet friendly, 12 watt low-profile car charger.

A low-profile design ensures that the charger fits neatly in most vehicles. This car charger utilizes universal charging circuitry that has been optimized for use with all tablets and smartphones. strikeBASE PRO ($39.99), a dual five watt wall charger for smartphones includes flush folding wall prongs for convenient portability.
www.scosche.com

By Gregg Ellman @greggellman The olloclip photo lens is now available for the iPhone 5, bringing photography to new levels for iPhoneographers. A pair of durable lenses give you a fish eye, wide angle and a macro view. Each lens is built on a clip, which fits right on the phone to cover the built-in […]

By Gregg Ellman @greggellman After my mom sent boxes of my family’s photo albums years ago we found a nice space on my closet shelf with hope of one day digitizing them. Ten years or so later, one of the boxes has finally seen the digital era, with no thanks to my scanning ability. I […] 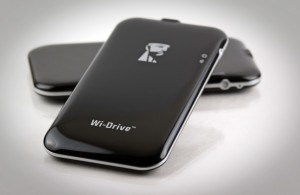 The tech world has an endless supply of gift choices for this season’s dads and grads celebrations. The only problem you’ll have is narrowing your choice so I’ll make it easier with my random list.

Portable devices are great but many limit the amount of storage for digital files. Kingston’s wireless pocket sized Wi-Drive extends the capacity of your portable devices up to 128GB.

The drive lets you store digital files including documents, videos and photos on the handheld device, which can be shared with up to three users simultaneously.

The Wi-Drive creates a WiFi network between the devices and once connected your streaming is just like the content is on your device itself.

To load data onto the drive, plug it into a computer via USB and it acts like an external drive.

A rechargeable battery is good for up to four hours of use before a USB charge is needed. 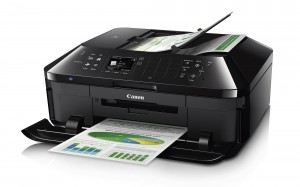 Canon’s PIXMA MX922 Office All-In-One (AIO) printer does it all, including my personal favorite feature _ an AirPrint wireless printing from an iPhone or iPad.

It’s built with a seemingly endless number of features including printing (WiFi, up to 8.5 x 11-inch borderless and PictBridge), copies, fax and dual sided scanning.

Scanning and copying can be done directly to a flash drive connected to the front side USB port or connected to a computer (Mac or Windows).

A 3-inch LCD is easy to read and navigate for setup and general use. It has a five-ink system with two blacks, cyan, magenta and yellow.

One of the black inks is a high-yield pigment black. This allows more documents to be printed without having to change the pigment black ink nearly as often.

Other features include direct CD or DVD printing, a 250-sheet paper tray along with a separate tray for 4-by-6 or 5-by-7-inch paper. 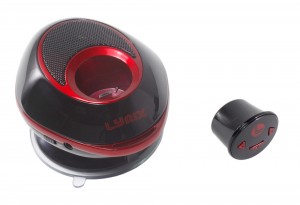 The pocket sized Lyrix Duo is a 2-in-1 Bluetooth speaker, which comes along with a removable receiver.

Once the receiver is connected to any Bluetooth enabled device, the speaker can be placed up to 33-feet away for crystal clear sound. Volume can be controlled on your device or on the receiver.

The speaker has a suction cup to secure it to any flat surface including windshields for handsfree calls while driving.

A built-in battery charges up with a USB connection and will last for about 4 hours of sound.

www.digitaltreasures.com  $49 available in red or blue

By Gregg Ellman @greggellman A lot of words can be used to describe the HitcasePro case for the iPhone 4/4S and 5 ($129.99), including waterproof, shockproof and innovative, which are all true. The case is a complete package, with a ABS/Polycarbonate exterior and it even has a built-in wide angle lens expanding the field of […]

By Gregg Ellman @greggellman. The Sound Oasis Sleep Therapy Pillow speakers slide into any sized pillow for relaxing sound. While they are marketed for enhanced therapy or privacy use, I thought they were a great accessory for bedtime TV audio. The wired stereo speakers ($22.99) are ultra-thin and plug into any device with a 3.5mm […]

By Gregg Ellman @greggellman Hoodman, a company known for innovative camera accessories, has launched a Custom Finder Kit for Canon and Nikon DSLR cameras. This accessory is a must-have for anyone owning one of these cameras and knows how difficult it can be to view the LCD in bright conditions or to see magnified details […]

By Gregg Ellman @greggellman Every time Jabra makes a hands-free Bluetooth headset, it seems to work better than the previous version, even if the previous was outstanding. With that reputation in mind, I looked forward to the next generation of Jabra Vox earbud styled headphones, which were rolled out earlier this month. Even before I […]

By Gregg Ellman @greggellman The CamRanger is the wireless device photographers have been waiting a long time for and after one use I can say it was worth the wait. It plugs into the USB-out port on most of the newer digital SLR cameras from Canon and Nikon to create a WiFi network with Apple […]

By Gregg Ellman @greggellman. The Globalgig WiFi hotspot is a pocket sized device, which you connect your portable devices to enable them to have 2G and 3G broadband Internet access from just about anywhere. The Globalgig charges via USB and works in seven countries around the world on various networks. In the United States it […]