After 20 years in Arlington, AMCP moves to Dallas.

When AMCP was formed by marketing and communication professionals from Dallas and Fort Worth in 1994, we settled in Arlington because it was convenient for everyone to meet half way between the cities. Over the years, most of the original folks were succeeded by people half their age, paper gave way to digital and entry and fulfilment transcended into the cloud. 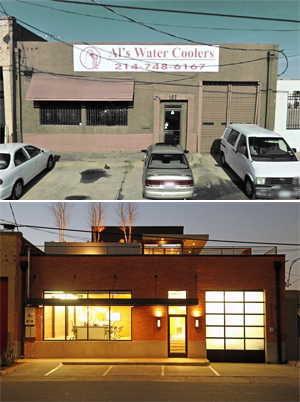 Out with the old (above) in with the new (below).

After 20 years of growth, it was long past time for a new facility to house an expanding and changing operation. So, we moved into the former Al’s Water Coolers in the Dallas Design District. Well, by then it wasn’t Al’s anymore. We spent well over a year turning the old brick repair shop into a space that would be comfortable and fun to work in.

Cleaning out the Arlington warehouse brought back a lot of old memories and provided provocative insite into how far marketing and communications has come in the last 20 years. Huddled together in a closet, were once state-of-the-art VHS, S-VHS, Beta, DV and DVD players and a DAT audio machine. Nearby, in the warehouse were an audio board and old production monitor that together took up the space of a Mini Cooper.

A recycler was called to evict the still working equipment along with two IBM Selectrics, and over a dozen computers and CRTs. Our first computer, an Apple II, the only thing that could still be worth some money, could not be found. It was probably thrown out years ago with someone’s old baseball cards.

It hurt to get rid of this once prized technology. But, it could have been worse. About a decade ago, we were able to sell or give away our ¾ in, 1 in and Beta SP machines. 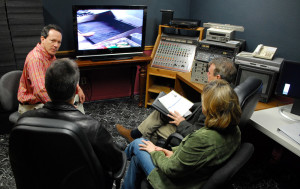 AMCP – The old days. Look at that equipment!

Ten years ago our judging room looked like a production studio with multiple video players and presentation tables. Now, a Mac and a PC do most of the work.

But while we may have less equipment, we need more work areas to accommodate the judges who go over the thousands of entries that are reviewed each year in the MarCom, Hermes and AVA Digital competitions.

The new building doesn’t need as much storage space as the old one. We used to get all of our entries through the mail or delivery services and sort through them on tables. Now we deal mostly with megabytes and gigabytes and keep them in the cloud. Next time we move should be a lot easier.

Hermes Creative Awards today announced winners for the 2015 international awards competition for creative professionals involved in the concept, writing and design of traditional and emerging media. Hermes Creative Awards recognizes outstanding work in the industry while promoting the philanthropic nature of marketing and communication professionals. There were over 6,000 entries from throughout the United […]

Society Awards, manufacturer of the Hermes Creative Award, MarCom Award and AVA Digital Award recently utilized the skills of famed craftsman David Yurman to create a special award for seven country music greats. Sometimes we tell our clients, “We’re more than an awards company.”  Here’s an example of what we mean: The Academy of Country […]

Are you marketing yourself and your company as well as you market your client? Winning a Hermes Creative Award is an inexpensive way to distinguish your work from your competition.

Are you marketing yourself and your company as well as you market your client? Winning a Hermes Creative Award is an inexpensive way to distinguish your work from your competition.

Our judges have been reviewing entries for over a month. Winners will be announced in three weeks.

With 195 categories, there is a category that fits what you do.

Hermes recognition proves to bosses and clients that you are producing great work that is appreciated within the industry.

Only judges see entries unless you give Hermes permission to display your work on our social media outlets.

Is your work among the world’s best? Hermes Creative Awards provides third-party, peer validation. Since 1994, Hermes parent organization, the Association of Marketing and Communication Professionals has evaluated over 200 thousand entries from the world’s top creative firms and professionals.

Enter the Communitas Awards for FREE Through Feb. 27, 2015

One of the things that sets AMCP apart from other marketing and communication awards programs is our philanthropy and encouragement of community involvement. During the past few years, AMCP has donated more than $150,000 to charitable, educational and artistic endeavors. We also waived thousands of dollars in entry fees for work that was produced pro […]

Get Recognized for Creative Excellence