You had me at Ello! 5 Questions with Founder Todd Berger

The following is a blog article from MarCom Awards winner John P. David.

Rarely a week goes by that I don’t encounter someone who is frustrated with social media. I have friends who have taken extended breaks from Facebook, and others who often see it as a platform for people to be nasty in a somewhat anonymous manner. Still others just find Facebook overly commercialized.

Entrepreneur Paul Budnitz and designer Todd Berger fall into this category. Budnitz, who also sells titanium “city” bikes that can retail for more than $8,000, and Berger are two of the founders of a new social network called Ello.

You may have heard about Ello, as it is being described by some as the “anti-Facebook.” Ello is an invitation-only social network that drew a lot of attention following an interesting confluence of events. Facebook changed some of its rules, which essentially forced people to use their real names on their profiles — or leave the site. A bunch of folks split FB and ended up at the newer, hipper Ello.

As word spread, Ello became the “it” site for several weeks and at one point had 40,000 people per hour asking for invitations to join. According to a story in The New York Times, the site went from 90 initial users in early August to more than a million now, with a waiting list of about three million. The rapid rise drew a ton of attention and even caught the eye of Jimmy Fallon and The Tonight Show.

The organization has taken a hard line against advertising — it even has a manifesto. (By the way, can a manifesto be anything but intriguing?) And last week, it changed its corporate structure, becoming a public benefit corporation with a charter that forbids the company from using ads or selling user data to make money. There’s all kinds of interesting stuff here, so I decided to take a deeper dive. Take a look at my recent interview with one of the founders, Todd Berger.

John P. David (JPD): Ello gained a lot of media attention lately and generated a ton of buzz. I would say a mix of positive and skeptical coverage. And The Tonight Show was a major PR coup. Given all that, how’s business?

Todd Berger (TB): Business is great. We’re working hard and having fun. We’re changing the way the Internet, and everyone connected to it, thinks about social networking.

JPD: Why do you think users are flocking to your site in large numbers? Is there a thirst for a cleaner interface, or are people fleeing ads, fleeing less privacy afforded by Facebook?

TB: We think it’s all those things. A desire for a more pure space, design, aesthetics, simplicity, privacy, a lack of advertising and data sales, trust — there’s all sorts of reasons, and they’re a little different for everyone.

JPD: Some commentators have said folks are joining your site in a response to requirements by Facebook that users are now required to create accounts under their legal names. Why is it important that people be allowed to use alternate identities if they choose? 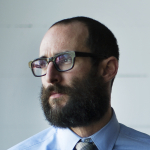 TB: Lots of people enjoy having an alias or pseudonym. This is for all sorts of reasons. It’s so a person can exercise an alternative or nontraditional lifestyle and have some semblance of personal privacy, support, and safety. Let’s say you work from 9 to 5 but after that you’re an artist, or photographer, or a writer and you have a pen name, or you’re a performer and you have a stage name — or who knows what. We support people that think differently, and we want them to have a place to connect, share ideas, and carry on in the manner that’s most fitting to them.

JPD: Ello doesn’t have advertising, but it is a business — and you have stated that you will charge for some features. What’s the inspiration for the future revenue model? Is it to make it a PBS or, perhaps, HBO of social media? Or is it a brand-new model?

TB: It’s to offer a new alternative. What we’re doing is most similar to Apple’s App Store paradigm. We’re going to sell features and experiences that enable people to customize Ello to keep making Ello better and better. We have some other revenue streams planned as well.

JPD: One journalist said the following about Ello: “One of its signature features is that the ‘provenance’ of anything posted to the site can always be followed back to its source, to divide innovators from follow-ons.” What are your thoughts on this? Do you believe that we are searching for authenticity in social networks and our communications?

TB: We’re all searching for authenticity. We want to live real lives. Honest lives. That’s what feels best. We all know that. Real things are better than fake things. It’s simple. We’re all looking for genuinely meaningful experiences. Ello’s a conduit for these sorts of experiences.

New social networks seem to come and go, but something about Ello gives me a sense it might stick. If you want to learn more, I suggest you give it a shot. I’m on Ello as johnpdavid (yes, I’m one of the chosen few), and I have some invitations left. I’m curious to know what you think.

This article was originally published on DavidPRblog.com and has been republished with permission.

John P. David is founder and president of Miami-based media relations firm David PR Group, and represents law firms, financial institutions, insurance companies and technology start-ups. He has more than 20 years of experience in the public relations industry serving South Florida-based and national clients. David frequently blogs about public relations and marketing at www.DavidPRblog.com and his posts are regularly published by the Huffington Post. He also serves as a partner with online reputation management firm WebFactCheck.com, a website that enables businesses to effectively respond to negative Internet posts.