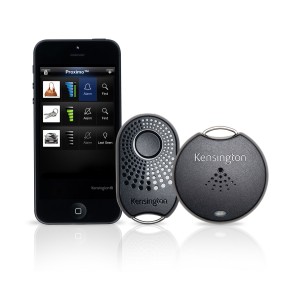 Kensington’s Proximo Fob and Tag Kit creates a wireless (Bluetooth) monitoring system between your keys, accessories and an iPhone (4S or 5) that will alert you if they are separated.

I tried the starter kit ($59.99), which includes a Fob, Tag, keyring and has a screen driver to open the hardware and insert the included CR2032 lithium coin batteries, along with a keyring.

The Fob attaches to the included keyring and after you have it linked with the free Kensington Proximo app (with a very easy setup), anytime the devices are separated an alarm sounds. If your phone is within range but you can’t seem to find it, press a button and it will

It’s easy to think of this as a monitoring device for your expensive smartphone but it also works in reverse once everything is linked up. With your phone in your pocket or purse, it can alert you that you have left your keys behind.

Within the app, you can set the sensitivity and a specific sound to allow you to control how far you are separated from your device before the alarm goes off.

The Tags look like the Fob and can be placed in a computer bag or attached to anything (or anyone) that you want alarmed. But unlike the Fob, it’s only one direction; the app will find it but you can’t use it to find your phone.

The Proximo App Dashboard tracks up to five items with a single Fob and up to four Tags. Additional Tags cost $24.99 each.

A battery meter on the dashboard will alert you of a low battery needing replacement in any of the devices, which should be about every six months.

If somehow you get out of range between the devices, an app lets you tap a button to let you know where your device was last seen and even pulls up a map with a specific address.

Even if your phone is on a silent mode, when the alarm is activated, you’ll hear it. 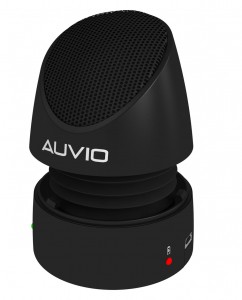 RadioShack’s Auvio expanding Bluetooth speaker ($39.99) is as simple as a gadget can be but it’s one of those things you won’t stop using.

Just twist open the speaker, pair it with your device via Bluetooth and you’ll be amazed at how much better the sound is than the built-in speaker on your smartphone or tablet.

It’s not room-filling sound, but great for an office or, especially in my case, having some sound to play satellite radio while stuck in hotel rooms.

A rechargeable battery is built in for up to eight hours of use and can be powered up in two hours with a USB charge using the included cable.

It is 2.5 inches in diameter, just over 3-inches long when expanded and about 2.5-inches when closed.

It’s also Bluetooth and works as a hands-free speakerphone and runs on a built-in rechargeable battery.

Both speakers have aux-in ports to connect to non-Bluetooth devices. 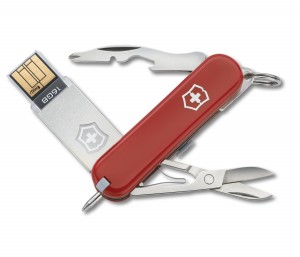 The Victorinox Swiss Army Jetsetter looks like a tradition pocket knife the company is famous for but instead of the knife you get a pocket full of storage.

A foldout and detachable USB 2.0 flash drive is among the features in the mini tool kit, which includes a ball point pen, bottle opener, phillips screwdriver, tweezers and scissors in the 16 GB model I tested out.

The detachable flash drive is Windows and Mac friendly, although it comes pre-loaded with Mac-friendly security software to protect your data stored on the device.

This lets you secure your data with passwords and even web brows without leaving any cookies or history behind.