A few years ago I thought so much of SanDisk wireless flash drive that I named it my coveted 2013 gadget of the year. To this day when I’m using it, someone asks what it is and when told, the response is always, “I gotta get one of those.”

Now SanDisk has given the great product an upgrade with the launch of the SanDisk Connect Wireless Stick.

The wireless flash drive works with iOS and Android devices, along with Mac and Windows computers with the free SanDisk Connect app.

After you make a connection, go to the SanDisk Connect app and you can choose whatever you loaded on the flash drive; videos, digital images, documents or music. You also have the option to make the flash drive password-protected.

As for the new model, it’s still the size of a typical flash drive, has a power button and an internal battery good for up to 4.5-hours, which charges from most any USB port.

While the original model had a slider to expose the USB port, the new one is more traditional with an end cap.

SanDisk said it went to a new design based on feedback gathered from the original wireless connect product. They “aimed to design a slim, simple and elegant device that could be extremely portable and easily accessed when plugged into a computer, while not blocking additional USB ports,” according to a company representative.

The main difference from the old to the new is the storage along with a more modern look. The original had a microSD card slot, enabling unlimited expandable storage.

New is the capacity when purchased. SanDisk felt users weren’t choosing to have multiple microSD cards so they eliminated the option.

Either old or new, the SanDisk wireless flash drive is an incredibly easy and inexpensive way to expand the storage capacity on a smartphone or tablet.

In my world, streaming movies while traveling has never been so easy. 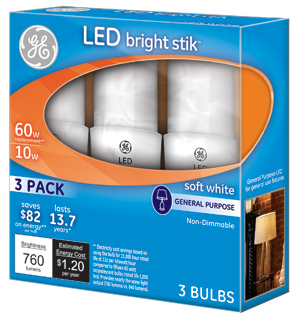 It’s kind of crazy that the light bulb has been around for so long but the past few years have introduced a load of new designs and lighting features.

A three-pack of the non-dimmable bulbs typically costs around $10 and, according to GE, it should cost about 10 cents per month to operate based on three hours a day of use at the electricity rate of 11 cents per kWh of power. They have a lifetime rating of 15,000 hours, 13.7 years and give off 760 lumens, a measure of brightness.

These bugs have a different appearance from most others with a slender, slime, sleek design.

It was designed with a size of 4.25 in x 1.25 round to fit in more sockets and fixtures compared to general tradition purpose bulbs, which I found to be true right off.

While the body of the bulb is different, the standard screw-in connection is the same so there’s no need to get new lamps to use the bulbs.

I’m not going to take out a color meter to test the lighting but I’ve been a believer in the LED lighting for a while and these new choices are great additions. The light they shine is great and you have your choice of soft white and daylight.

The wireless desktop speaker/alarm clock (5.2 x 5.6 x 3.3-inches) has the features of the original Sound Rise along with a new design. 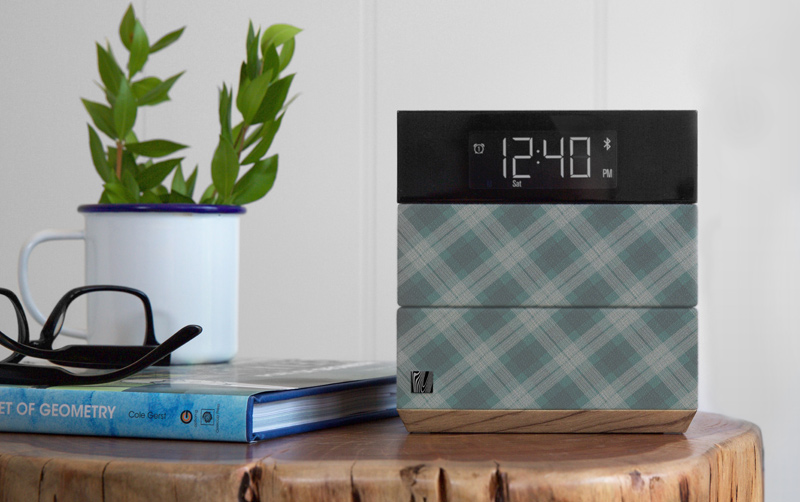 The dual alarm system features weekday and weekend settings, which also have the option for gradually increasing volume to help avoid that loud panic wakeup, which I’ve experienced.

On the outside is the new great looking plaid design giving it a modern look.