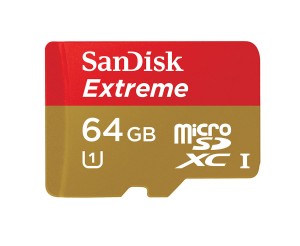 SanDisk Corp. has announced what it calls the fastest microSDXC card to hit the market with SanDisk Extreme microsSDXC, which has read speeds up to 80MB/sec and write speeds up to 50MB/sec.

Combine this type of card with the advanced digital SLR cameras today and photographers will get continuous burst modes along with lightning-fast transfer speeds.

With a high performance speed class rating of 10, it is also ideal for capturing video in full HD or 4K recording.

The microSDXC card can be used in any device that accommodates the fingernail-sized memory, or use the included adapter for an instant SD/SDHC/SDXC supported device.

The cards come with a lifetime warranty (not any lost digital content), are shock and waterproof and come with a download offer for SanDisks RescuePro Deluxe recovery software to recover images that may have been accidentally deleted. 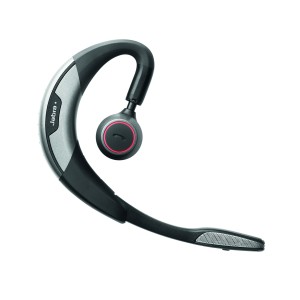 The Jabra Motion headset is promoted by the company as a high-end Bluetooth (4.0) and it’s true to its word.

It’s a little larger than most Bluetooth headsets but after using it for a few minutes you forget it’s even there.

It’s built with an over-the-ear design and a boom microphone for the big-time talkers of the road.

The in-ear speaker can be adjusted (includes three different ear gels) for the perfect fit and when it’s not in use, just fold it up and you have a pocket-sized portable device.

Pairing for Bluetooth devices should never be difficult but the Motion seems to do it easier with it’s Near Field Communication (NFC) technology. This includes connection it to smartphones, tables or computers.

The impressive technology continues with built-in motion sensors to control just about everything in the headset. including battery life, voice controls and audio.

The headset allows multimedia streaming including audio from a GPS and or your favorite tunes.

In addition, with it’s latest Bluetooth features, you’ll have a range of of up to 100m/300ft from your your connected device, which is 10 times the range of similar headsets.

A microUSB charge should be good for about six hours of talk time or 10 days on standby.

The free Jabra CONNECT app (iOS and Android) lets users customize the headset from your LCD. 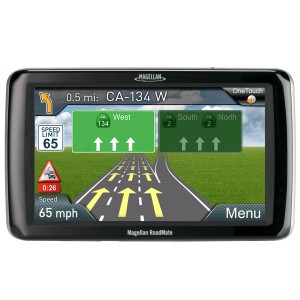 Every time I see a new handheld GPS unit, such as the Megellan RoadMate 9250T-LMB, I’m amazed that fold-out maps ever existed.

Every feature you would want from a device like this is included, including the option to add a back-up camera. When you add the camera, the navigator automatically switches to it when your car goes into reverse.

Physically, the RoadMate 9250T has a 7-inch HD display with responsiveness and clarity second to none and connects to your Bluetooth phone to work as a handsfree device.

Magellan’s Bluetooth SafeTexting helps in the handsfree mode, which lets a driver respond to a text or call with a pre-written text message along with estimated time of arrival and your location.
After you plug in where you want to go, the directions are read to you well in advance of your turns along with naming local landmarks as turning points.

You can program the routes to avoid specific roads, stay on highways and it even tells you where parking lots are near your location along with the hours of operation.

The 9250T comes with free downloads of lifetime maps and traffic alerts. A windshield mount and car charger are included.