Many are familiar with making the impossible possible in the face of short deadlines. But how many have donated their time and resources to help with such efforts?

Well, that’s exactly what a two-person crew from Brilliant Factory did. With only a weekend to complete a 2.5-minute video for the city of New Port Richey’s business development director, the team delivered a polished, persuasive video using original footage and anything else they could uncover about the Historic Hacienda Hotel.

To learn more about why Brilliant Factory stepped in to tell the story of its historic hotel and how it created a clip on such short notice, we talked with Brilliant Factory’s Jeffrey Hilton.

How did you hear about the City of New Port Richey’s need and why did you decide to donate your services?

As long-time residents of New Port Richey, our company’s founders were strongly moved to help in the preservation of the beautiful Hacienda Hotel, built by Hollywood elite, including silent film star Gloria Swanson (star of the classic film, “Sunset Boulevard”).

Was there any particular reason video services were offered as opposed to another medium? 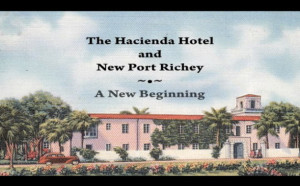 We knew that the hotel would seem to be just another old building left to decay, unless a strong, visual message was built around its architectural features, the community, and their undeniable place in cinema history. A video presentation allowed us to include actual footage of one of Ms. Swanson’s films, and place the Hacienda in context with its illustrious past.

Talk to me about the time constraints. How did your two-person crew overcome this obstacle?

The city’s Business Development Director needed a solid presentation in time for a meeting with local and state VIPs, so our team rush-assembled a happy little piece that depicts the fascinating history of the city, its famous Hacienda Hotel and the great potential of both.

We solicited local curators of historical footage and photos to contribute images and information about the hotel and surrounding area, going back to the time of the city’s founding and the initial construction of the hotel. We also tapped into current local news footage and articles about the hotel. Our team toured inside the building, shooting fresh video footage of selected architectural features.

With all of these elements at hand, we wrote a script, recorded the narration and rush-edited the production to meet the city Business Development Director’s looming deadline.

How was the piece received?

The response to the piece was strong and far-reaching. The video was played to great fanfare for the City Council and various community groups, such as the Rotarians. A State Senator has raised $1 million for the hotel’s preservation, and things are looking bright for the grand lady of the Hollywood of the East.

The video is now featured on the city’s Economic Development website, has been praised by the mayor in his blog, and the local State Senator’s offices have a copy for presentation online and in the State Senate.

What’s ahead for the Hacienda Hotel?

The first step for the Hacienda is utilizing the initial moneys for historic preservation. Additionally, the city is now entertaining bids and proposals from various developers who would invest time and dollars to remodel the hotel into a functional building and local historic attraction. The hotel could be returned to its original use as a boutique hotel, or it could become a bed-and-breakfast or event center. The future is looking bright for the Hacienda Hotel.

Brilliant Factory is a start-up whose mission is to promote and accelerate businesses in communities nationwide. Brilliant Factory is a new division of Academy Leader Inc., a multifaceted, multinational media company that spans motion pictures, television, publishing, radio, and new media. The agency has won over 200 national and international awards for its original video productions.

Email the company at info (at) Brilliant Factory (dot) com.