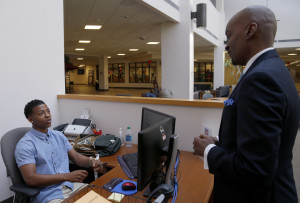 The State of Oklahoma reports 1 in 80 state residents are incarcerated, and 45 percent of the state’s inmates are black.

Two years ago, Oklahoma City Community College (OKCCC)’s President Jerry Steward noticed black males were dropping out of the college at a rapid rate, and the demographic’s overall GPA was the lowest of all the ethnic groups on campus. President Steward saw a potential correlation between black males’ drop out rate and Oklahoma’s dangerous incarceration statistics, and decided to work to solve the problem.

Steward approached Bryan Dickens, a successful image consultant, to start a mentorship program for black male students called Students Connecting with Mentors for Success Program. The program was an overwhelming success, with the black male OKCC GPA rising from 2.3 to close to 4.0 within two and a half years. Dickens received numerous awards for the program, and has since been approached by other institutions to implement a SCMS program on their campuses.

To read more about the SCMS program, visit here.