If you are lucky, sometime in your academic career you have the opportunity to learn your future trade from someone who is so exceptional that being exposed to them for even a short time, shapes the way you go about your life and your career.

When I was a journalism student at the University of Texas many years ago, I had two such professors. Griff Singer was a gruff (mostly fake) old newspaperman who ran the Daily Texan like he was Ben Bradlee and we were uncovering the Watergate scandal for the Washington Post. I can still feel his copy editing cutting straight to the bone. Red Gibson was a dynamic personality who commanded respect. He had this strong air of professionalism about him that defined his role as teacher and ours as students.  There was a respect that bordered on fear, but you could sense that it was a cover-up for the deep compassion he had for his students. His classes were fun and interesting and you didn’t want to miss them. Those two men inspired me and taught me lessons I remember today.

Two journalism students at the University of Northern Colorado think that journalism Professor Gary Swanson is one of those special teachers.  International students Anne-Sophie Garrigou from France and Alejandro Alamo Sanabria from Spain, nominated Swanson for a Communitas Award for his unselfish dedication to his profession and his students. In addition to wanting to proclaim him Professor of the Year, the students cited Swanson as an Inspirational/Visionary Leader… incredibly high praise coming from his students. After reading the nomination, the judges agreed.  Although we can’t bestow a Professor of the Year Award, we are pleased to present Professor Swanson with a Communitas Award.

After you read the nomination letter, we think you’ll agree that Professor Swanson is a special person deserving of recognition.

It has been about 9 months that we have known Professor Swanson, and within that short time frame, he has truly inspired us and made a tremendous impact and difference in our lives. We are both from different countries: France (Sophie) and Spain (Alejandro or Alex) and came to the University of Northern Colorado as 1-year International students in the area of journalism.

In the fall, 2011, we both signed up for Professor Swanson’s Documentary class, his Visual Journalism for New Media class, and Sophie also took Broadcast News Writing with Dr. Swanson. From our first meeting with Professor Swanson he was sincere, truly interested in the well-being and success of his students, and announced he was always available by giving us his cell phone to contact him “any time – even on weekends” with questions or concerns. A professional relationship grew between us over time with mutual respect – and with that came trust.

After completion of the Documentary class in December, 2011 Professor Swanson offered us the opportunity to co-produce a documentary on The American Dream – a project that changed our lives forever. Professor Swanson offered to create and teach a directed-study course to each of us (Sophie and Alex) as well as 2 other students for course credit. And he received no additional time-off or pay to do this. Additionally, he went out of his way and paid out of his pocket for 3 of us to rent a car and drive from Greeley, Colorado to Cincinnati, Ohio and interview the director of the Center for the American Dream at Xavier University. He felt this would be a tremendous experience for us since we had not traveled around the country since we arrived in America in August, 2011. And the director was a critical interview for our documentary. Dr. Swanson also paid for our gas, food, and lodging. It was an incredible journey and took 5 days for us to complete and return to Colorado. Besides the monetary expenditure he provided, Dr. Swanson trusted us and had opened a gateway of friendships to be fostered, especially for us. This enabled both of us to create meaningful connections with people outside of the normal circle that we had already been exposed to at UNC, and in turn, expanded our horizons.

Professor Swanson imparted life lessons through the conversations we have shared and continue to share, which we both enjoy immensely. He inspired both of us by telling his own stories of growing up, and ‘making it’ in the media world and in academia, and encouraged us to succeed by never accepting second-best. 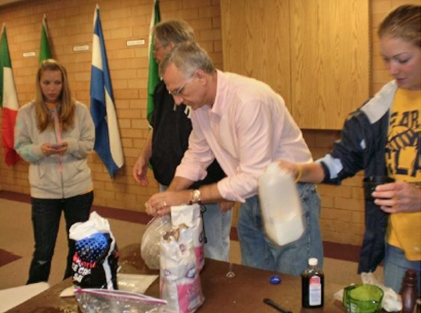 Professor Swanson may not have all of the accolades that some others might have. He may not be well known; but he has definitely made a huge impact and difference in our lives. He imparted knowledge, wisdom, and most importantly – humanity. Professor Swanson has become our favorite teacher out of all of out teachers we have had from High School through college in our home countries and now here at the University of Northern Colorado for the past year.

It should not go without saying that Professor Swanson has won many awards for his professional work, including 3 national EMMY’s. He is also highly commended in the academic evaluations at our university and earns top reviews from his students every semester. Professor Swanson not only knows his craft, he also deeply cares about his students and puts in an extraordinary amount of time helping us improve. His teaching style ensures open communication and provides a highly conducive atmosphere for students to really learn.

Professor Swanson’s personal dedication to the university community does not end with the assistance he has extended to us as well as within his other classes. He was selected as Faculty-in-Residence at our university 3 years ago and continues to live in Lawrenson Hall dormitory with his wife, daughter and of course nearly 400 students who he mentors and provides programs and assistance for. Dr. Swanson has been involved with numerous other projects, documentary and otherwise, such as his work in the country of Peru, on “resilience” for the devastating earthquake in 2007, his involvement in the fundraisers for the Haiti Earthquake and the Japan Tsunami, ‘Relay for Life’ fundraiser which he has been involved with helping raise money for the “cure for cancer” the past 4 years, another fundraiser for the Lisa Hayes’ “the working dog” surgery, speeches he has given locally, nationally and internationally on journalism: to everyone from the Greeley Senior Citizens, to Greeley’s John Evan’s Middle School (where some of the footage for our documentary was videotaped with the direct help and guidance of Dr. Swanson), to his honors as Distinguished Keynote Speaker and Conference Chair at conferences in Osaka, Japan, and Singapore.

And today, here we both are highly recommending a truly outstanding educator and person – as “Professor of the Year.” He’s not just an individual who is a faculty member of an educational institution, but one we both consider our experience with him to have been the “pinnacle” of our educational careers. And Professor Swanson is also an inspirational individual who is dedicated to his community. And it is with this high level of respect that both of us have for him, which makes us choose to recommend him for this prestigious honor – of which he is most deserving. We hope you will agree and thank you for your consideration.

Congratulations to Professor Gary Swanson who embodies the spirit of Communitas.