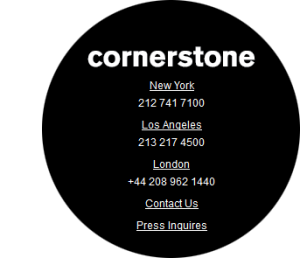 Pepsi wanted to connect music to professional football while increasing its presence inside and outside the game.  The cola company turned to Cornerstone.  Based in New York with offices around the country, Cornerstone is a full service marketing and creative agency with incredible connections in the music industry.  The agency reached out to superstar artists who also happened to be hometown football fans.  The artists created original music for each team and then performed in each stadium.   Kelly Clarkson stepped-up for the Dallas Cowboys, Aerosmith for the Patriots, and Kid Rock for the Detroit Lions (to name a few).  The results were impressive to say the least:  1.9 million song downloads; 725 million media impressions; 94 million Pepsi Anthem twitter impressions.   The estimated advertising value was $14.6 million dollars.